Well, the weatherman kept saying it was going to snow, but they are prone to saying lots of things are going to happen that never do. Okay, so this time they were right. Who would've thought they could actually "predict" the weather correctly. Of course the girls and I were outdone. It started snowing while we were in church, and since we had driven in separate cars because Michael was ushering that day, the girls and I left early so as not to have too much difficulty getting home. (You see, even though I lived in Michigan for 5 years, I didn't really drive much in the winter time).

On the way home, it seemed as if there wasn't going to be anything to talk about, nothing seemed to be sticking to the ground. It was piling up nicely on the cars though, but that doesn't affect school closings. However by the time Michael arrived home a few hours later it was coming down heavily and sticking. Of course my precious girls wanted to go out and play in the pretty white stuff; so my wonderful husband took his girls out, and they had a blast. Here are a few snapshots of their wintry escapades. 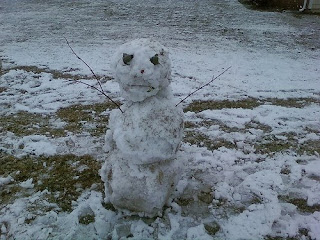 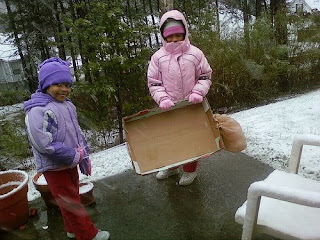 The girls made their own "sled". Pretty good huh? Bear actually went down the hill and got stuck in the shrubs, so hubby had to go rescue her. That was one funny rescue, but I am not allowed to post the video. I had to take it off my Facebook page last night. I really had posted it accidentally, but hubby thought I put it up to see how many comments I could get. I am sure it would have gotten many a hit, but I took it down anyways. 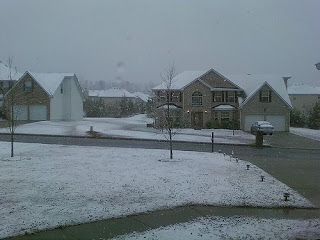 This is the type of picture my uncle would have sent me. I remember last year, Chicago got hit with a bunch of winter storms, and he was always sending me picture mails with photos of his truck covered in snow. He would have enjoyed this.

We woke up this morning, to news that the girls didn't have to go to school, and even hubby stayed home awhile because of the road conditions. People all over the state didn't have power, (my mom in Athens being one of them). The last report I heard, estimated the number of people without power at 57,000. That is ridiculous. Lots of fallen trees, icy roads and accidents. Please drive carefully.

Be Blessed
Posted by Shanta Hayes at 3:28 PM

I love the snow! Make a few snow angels and throw a few snowballs for me, k? :)

Atlanta Moms on the Move